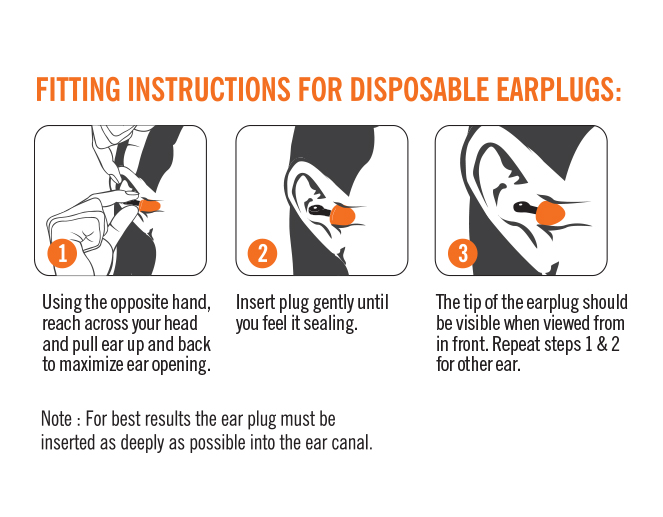 Ear infections, dermatitis and skin irritations are some of the health issues risked through the inappropriate use of disposable personal protective equipment (PPE).

Disposable PPE such as earplugs, gloves and face masks can cause users a variety of problems making it imperative workers are educated on their correct fitting, use and replacement schedules.

“Most people don’t clean their hands before rolling up earplugs so they are using dirty fingers which can push bacteria in the ear and cause infections,” he said.

“You should also ensure you dry your hands properly after washing. If they are dripping wet you’re putting in a wet earpiece which could also lead to a middle ear infection.”

Rodgers said that most disposable earplugs should go straight in the bin after use, unless they are a washable style that you can clean along with your hands, or a ‘semi-disposable’ pod style, such as the Propod earplugs.

“The Propod has finger-holds which allow workers to take them out without tainting the component that sits in the ear canal,” he said, adding that they must be placed in clean conditions when not in use and are still classified as disposable but not ‘single use’.

“They also have a lower, Class 3 decibel rating which benefits workers who require hearing protection but must be able to hear background noises such as an approaching forklift or co-worker communications.”

Research from a leading Melbourne audiologist found 75 per cent of construction workers were suffering hearing damage, often because they chose not to wear their hearing protection as it blocked out too much noise, increasing risks on the site.

“Class 5 is not always the best solution. There are different designs for different ratings and uses which should be matched to the application and risk,” Rodgers said.

While less of a health concern, disposable gloves also pose potential dermatitis and skin problems if not replaced regularly and can also lead to external contamination issues.

“If someone is using a disposable vinyl glove in the food industry and they take those gloves off, have a break and then put them back on then you have a cross contamination issue.”

Other health issues may come from disposable face masks.

“Disposable masks have a reasonable lifespan and can be worn for a whole day but if you wear one too long then there are potential health risks,” Rodgers said.

“Once again, it depends on the factors and risks that you’re dealing with in the workplace.”

Rodgers said that reusable PPE could also cause health or contamination issues, especially in an environment where hygiene is critical.

“If it’s a dirty old pair of ear muffs that are 10 years old, who knows what could be on them. Fresh, clean PPE is the best choice in a hygiene-critical environment.”

Another factor that influences choice between disposable, semi-disposable or reusable PPE is the job length.

“People might not actually need the PPE for long and don’t need to spend $50 on a pair of ear muffs,” he said, adding that permanent PPE must still be cleaned regularly.

Rodgers added that Health and Safety Executives (HSE) play an important role in educating workers on reducing the health or contamination risks posed by reusable PPE, suggesting posters in toilets and washrooms help.

“It’s about educating workers on how to select, fit, use and maintain the appropriate PPE, whether it is disposable or reusable,” he said.

‹ Cold hands: dangers and prevention on-site › How and Why Fatigue Increases Safety Risks