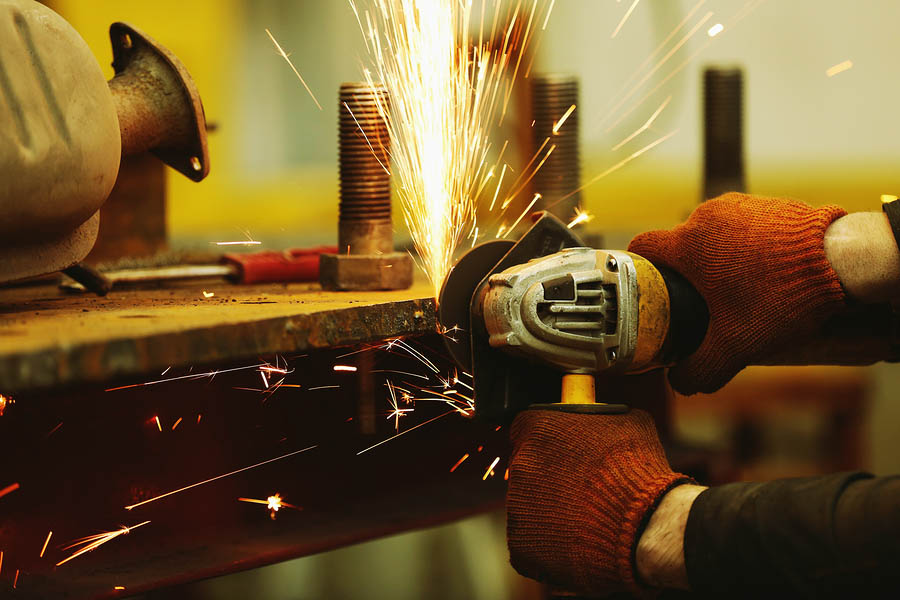 The angle grinder is one of the most dangerous tools in the workplace and so appropriate angle grinder safety and training on operating procedures are critical for the sake of workers and their families.

The most serious injuries from angle grinders are lacerations from kickbacks and lacerations from attachments (such as grinding discs and wheels) that break or shatter to become projectiles.

A Queensland worker died in early 2016 after being struck in the chest by a broken 9-inch angle grinder attachment prompting WorkCover Queensland to issue a safety alert on the use of guards and disc size with angle grinders.

Operators are encouraged to consider the necessity of the task and other possible methods to achieve the end outcome before committing to the use of an angle grinder.

However if the use of an angle grinder can’t be avoided, ensure you use it safely.

Nine inch angle grinders have a higher risk of injury due the increased power and size of the unit prompting some work sites in Australia to ban them.

It is important to do a risk assessment of the workspace before operating an angle grinder to ensure that hazards have been controlled.

Inform other workers in the area that the angle grinder will be operating, tidy away slip and trip hazards, ensure that there are no flammable substances in the area and ensure that the workspace is well-ventilated to prevent dust and vapour from becoming breathing hazards.

The workpiece should be well-secured and supported so that the operator can work comfortably, preferably at waist height.  Never operate an angle grinder between your legs while sitting on the floor.

Choosing the wrong disc for the angle grinder is a major contributing factor in accidents.

A disc that is too large for an angle grinder will not be manufactured to support the higher speeds of the smaller grinder so there is an increased probability of the disc shattering.  Furthermore, the central disc hole will likely be larger than the spindle flange increasing the risk of the disc becoming unbalanced and shattering, with potentially deadly consequences.

When picking the right disc, keep in mind the following:

Ensure the angle grinder is checked for damage or safety issues before use.  This includes ensuring that the handle and guard are both secured firmly in the correct position and the power cord is in good condition.

While operating an angle grinder:

It is important that operators are trained under one-on-one supervision in safe practices when using an angle grinder.

Two hands should always be used when operating an angle grinder – one to hold the handle and one to support the weight.

The angle grinder should be allowed to run up to speed before being applied to the job with minimum pressure so that it doesn’t grab and kickback.

Grinding discs should be applied at a 15 to 30 degree angle to the object.

Operators should be careful not to let the angle grinder bump against anything, nor should they stand directly behind the tool.

Angle grinders must have stopped turning completely before they are put down or moved around the workplace.

Operators should take regular breaks to rest their hands and arms.

PPE is the critical last line of defence in case things go wrong and given the dangerous nature of angle grinders, the greatest level of protection should be used, according to national training manager of Milwaukee Power Tools, Paul Jones.

“High impact rated wraparound eye protection is a must and in addition a face shield is highly recommended,” he said.

“Class 5 hearing protection should always be worn, regardless of the type of work being done with an angle grinder,” Jones said, adding that users may also consider wearing both earplugs and earmuffs.

“The noise volume will vary depending on the abrasive accessory that you are using – such as flat disc or a grinding disc – and also the type of material the grinder is being used on”.

“Gloves should be well-fitted and provide good dexterity and the best possible protection against cut or abrasion and heat,” he said, adding that vibration resistant properties are also of benefit, specially on angle grinders that don’t have Milwaukee’s built in anti-vibration features.