Dangers, Deaths, Injuries and Perceptions in the Construction Industry

The Australian construction industry is the third most deadly with around twice the average fatality rate and is ranked fifth for causing serious injury, according to Safe Work Australia (SWA).

Despite improvements in recent years, 2012/13 financial year data shows labourers in Australia suffer the highest incidence of serious injury of any profession, followed closely by tradespeople in third place. During the five years to 2011/12, falls from heights (buildings, ladders and scaffolding) were the most deadly, followed by deaths from vehicles and then deaths from being hit by falling objects. 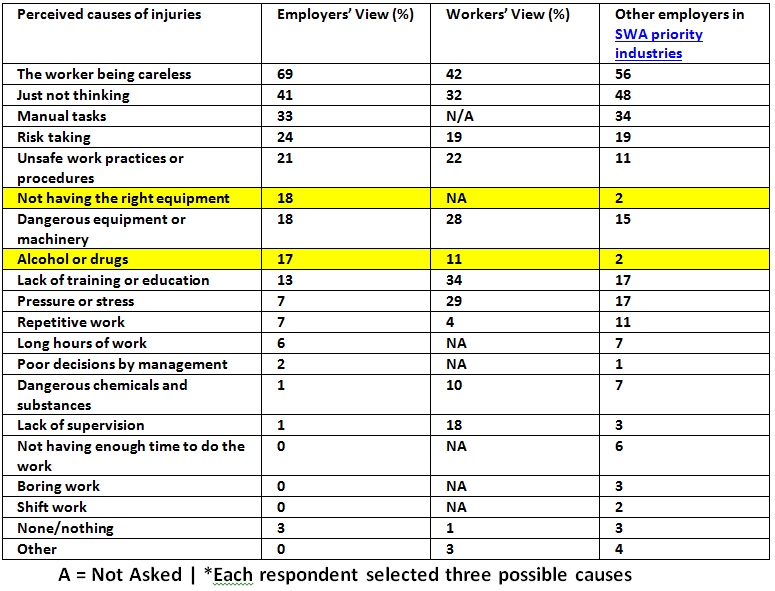 SWA research found that the most common causes of these injuries was lifting, pushing or pulling an object (30%), hitting or being hit by an object (31%) and falling from height (15%).

Worryingly, two major contributing factors of injury are not having the right equipment and the use of drugs or alcohol.

With a safe work culture proven to save lives and money, here’s a list of some of the most common incidents and how to help prevent them.

The most common work-related injury in the construction industry, safety measures should include using high quality tools and machinery with guarding and braking, training staff and providing cut resistant gloves fit for purpose (eg wet or oily).

The incorrect glove type may increase the dangers due to a lack of control or a lack of comfort leading them to not wear gloves at all.

Worryingly, 16% of workers in the construction industry who were exposed to airborne hazards such as dust, gases, vapours or fumes reported that they were not provided with any control measures – including PPE. A further 6% were supplied engineering controls such as extractors but no PPE.

The provision of masks and respirators is critical to the health, safety and morale of workers. Further measures should include ventilation systems and reducing time spent in places with airborne hazards.

With 55% of construction workers saying they are exposed to vibration from power tools and machinery, employers are responsible for minimising their risk of the potentially dangerous “hand arm vibration syndrome” (HAVS).

However 22% of those exposed to vibration at work reported that they were not provided with any control measures.

Dangerous levels of noise is common on a construction site, yet 8% of construction workers are not provided any control measures including PPE such as ear plugs or ear muffs.

Other measures should include training and signage, rotating jobs, placing noisy equipment in an isolated room, and purchasing quieter machinery.

Around 45% of construction workers are exposed to chemicals such as cleaning agents, degreasers, paint and solvents. However 12% of workers are not provided with PPE such as protective gloves and clothing, nor control measures such as warning signs, washing facilities and training.