Does drug and alcohol testing improve safety in construction? 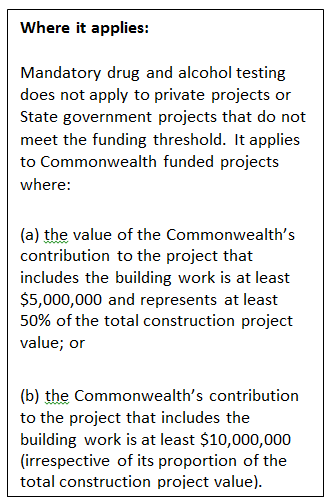 In September 2015, the Australian Government announced amendments to the Building Code 2013, requiring compulsory drug and alcohol testing of workers on some (see right) construction sites.

In announcing the zero tolerance policy and changes to the Code, which commenced 16 October 2015, the Minister fo r Employment, Senator Eric Abetz said: “Safety is a paramount consideration on construction sites.  It is simply an unacceptable risk to… have workers affected by drugs or alcohol.”

Auditing will be conducted by Fair Work Building and Construction whose drug and alcohol testing fact sheet states a fitness for work policy must address howworkers and contractors on site will be required to comply.

Urine testing and saliva testing are both permitted.  Alcohol, Opiates, THC, Cocaine, Benzodiazepines, Amphetamines and Methamphetamines must be tested for.

A worker returning a positive test must not work until they can prove they are fit for work, the process of which must also be outlined in the Principal Contractor’s fitness for work policy, along with how that worker will be counselled and assisted.

Alcohol consumption rates in construction are a serious concern, with nineteen per cent of building and construction apprentices reportedly drinking alcohol during work-related hours, however drug and alcohol testing is a contentious issue.

Leading OHS commentator, Kevin Jones of SafetyAtWork blog states: “…would not greater safety benefit be gained by addressing the risks posed by machinery, working at heights and in congested areas?  Drug and alcohol testing will do little to reduce these risks…”

Indeed, the jury is out as to the effectiveness of drug and alcohol testing in the workplace. 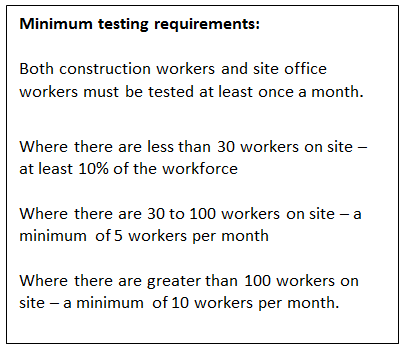 A 2011 report titled Workplace Drug Testing: Evidence and issues, by Ken Pidd and Ann Roche ofthe Flinders University, National Centre for Education and Training on Addiction (NCETA) states that “evidence is inconclusive regarding the efficacy of drug testing in reducing workplace accidents”.

The report discusses US research that found the best results in reducing drug and alcohol use at work were achieved when a positive test resulted in instant dismissal, however, added that similar deterrence was achieved though drug and alcohol education.

Furthermore, the report states drug and alcohol testing can decrease incident reporting due to fears of a possible test.

It also states that “while drug and alcohol use can play a role, other factors such as workloads, fatigue and poor working conditions may play a more important role”.

However, the report concludes that drug and alcohol testing may have some benefit, particularly in more hazardous industries and work roles and stresses the importance of ‘best practice’ implementation, outlined in detail in the report.

‹ Chemical Resistant Gloves: Ensuring Appropriate Protection › Black lung in mining: Why it resurfaced and how to prevent it